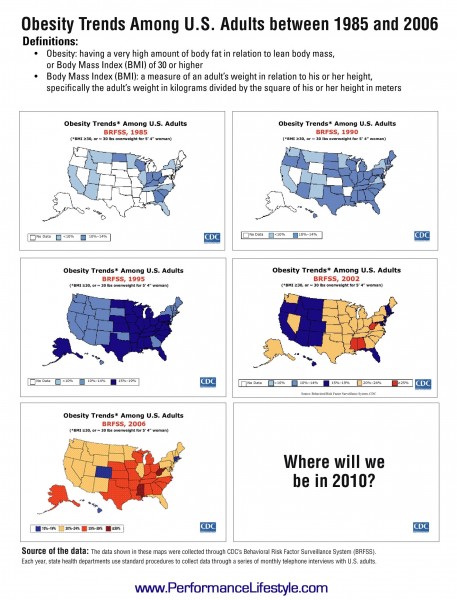 Years ago, I started tracking the CDC’s (Center for Disease Control) now popular obesity tracking system. It’s pretty impressive, (not a in a good) way, to see what’s actually happening with the weight of the nation in the US on a state by state basis, with respect to obesity, but even more specifically, fruit and vegetable consumption, which can predict obesity.

Here is an example of one of the graphics I’d been using up until 2010.

The Standard American Diet, is in a Sad State. As we are consuming less fruits and vegetables than we were a decade ago, and a decade ago we were not even close to consuming enough, hence the dramatic increase in obesity rates.

First, let’s establish one thing that is true. The primary reason this growth in obesity is happening, is because as a population we are eating nutrient poor diets, that are high in unhealthy protein, fat, cholesterol, hormones, refined and added salt, oil, sugar, chemicals etc. If you are a human being, let alone an animal (who have the same response); if you are going to eat a diet based on these foods, you are going to get fat and sick. Period. If you are genetic wonder, you may not get fat, but you will get sick and live a shorter life. Period.

What’s happening is perfectly normal, given the circumstances. If the majority of your diet is not from leafy and green vegetables, fruits, legumes and beans, whole gains, starchy vegetables, nuts and seeds, and rather from nutrient poor foods, it’s virtually predictable to figure out what will happen; just as predictable as what will happen if you consume up to 90% or more plant-based nutrient rich foods. Disease, or Health, what’s it going to be?

Here’s the deal, in my straight shootin’ kind of way. I don’t know any other way to be, when it comes to this since we’re not playing around with your health. We like to have fun, but if we make too much light of this situation, you may just relegate dietary change to the sort of social dialogue “fat cats” have about their personal trainers. As if it was a comical, light matter… “oh, Johnny’s got to lose a few pounds”. It’s not; eating a nutrient poor diet makes you fat, sick and kills you, leaves your wife or husband spousless, and your kids orphaned and costs the rest of a big-time dollars.

You may think it’s a social status thing that you are eating steaks and all the junk food you can shovel in, but you are confusing this with the 1980’s, before we all figured out that eating nutrient poor foods like this is crippling the nation and the environment for all of us, including you for that matter.

If you are overweight, you are not eating “rich”, you are eating poor, you are eating a second class diet, maybe even a third class diet rich in calories, and low in nutrients. The kind of diet, mostly poor people eat, even though they don’t have to either! The hundreds of fruits and vegetables (more foods than in any other category other than refined junk), are abundant almost everywhere.

So don’t get too caught up in how rich a diet you are eating, or that you can afford such calorie-rich foods, because you are on the wrong side of rich, and it’s likely you are on a downward spiral towards death, as shown in the graphic above. These graphics are not based on poor states versus rich states. This is all the states and wealthy people are leading the way.

Just watch Weight of the Nation, to see what happens when people of any economic profile eat calorie-rich food and not nutrient-rich food.

What was the CDC’s goal for vegetable and fruit consumption?

Not one state even hit the CDC’s goals of 2 fruits a day, by 50%!.
Folks, we’re not talking about some special diet here; we are talking about your natural diet. The one you should have been born into. Not one state hit a third of the recommended 3 servings of vegetable either. This is crazy!

The CDC’s original goal was to get each state (up to 75% of each states population), eating more than >2 fruits and >3vegetables, each day and we are not even close. Besides New Englander’s consumption of fruit, neither goal was hit, by even 25%.

The only state that hit one of the goals, was Idaho. And that probably had something to do with Potato’s.

Your diet should be upwards of 30-60% in total, coming from Fruits and vegetables, with the bulk of the rest, short of maybe 10% or less, all coming from plant foods, also including, beans and legumes, whole grains, nuts and seeds etc.

Up to 90% of the foods you eat, should be coming from natural plant foods, else you are assured a spot on the obesity tracker in your state and not fulfilling your longevity potential as a human being. And that’s why nutrientrich.com is dedicated to helping people who are eating nutrient-poor diets make the Switch to a nutrient-rich healthy eating style they can call their own, guided by the More Plant-Based Nutrient-Rich® Approach.